All Buddhist traditions originated from the teachings of Buddha Śākyamuni.

At the age of twenty-nine, one day, he went outside the palace and on the streets saw a sick person. Instantly, he felt the physical pain and mental suffering that the sick man was experiencing. He really felt that experience within himself and was determined to think of a solution to overcome such suffering. He thought about the possibility of learning medicine but realized that medicine can cure only physical sickness—not completely end suffering.

He wondered if there were a method to eliminate all sufferings. He made a trip out of the palace again. This time he encountered an old person. Just like before, he instantaneously felt the physical pain and mental suffering of old age within himself. He made another trip and this time he saw a dead person. He immediately experienced the same suffering of death within himself.

These three encounters made him ponder: “Just being a prince in a glorious kingdom is not the right way to help and to benefit all beings.” Thus, he renounced his kingdom and left the palace to seek for Dharma.

He had been practicing Dharma for years. At one point, when he was meditating under the Bodhi Tree, many evil spirits or māras attempted to create obstacles to disrupt his meditation by attacking him with weapons and by emanating many beautiful girls dancing in front of him. However, due to the power of loving-kindness and compassion, he defeated all these evil beings. He also transformed the shower of weapons into the shower of flowers. All of this was possible through the power of practice, loving-kindness, compassion, and bodhicitta or the enlightened mind.

He eventually attained buddhahood in Bodh Gaya, for the sake of all sentient beings. This is the second most important noble activity of Buddha Śākyamuni. After attaining buddhahood, he did not turn the wheel of Dharma right away. He declared, “I have the precious and profound nectar-like Dharma teachings, but no one is ready to receive such teachings.” However, brahmās and others supplicated to Buddha to turn the wheel of Dharma. Forty-nine days after attaining buddhahood, he turned the first wheel of the Dharma in Deer Park, Sarnath, near Varanasi, to five fortunate disciples, giving teachings on the four noble truths, which revealed the truths of suffering, its origination, its cessation, and the path for cessation of suffering.

From that time onward Buddha has given an enormous number of teachings in order to suit the different mentalities of the followers, so that they can be freed from the lower realms and also from of the entire saṃsāra, to attain liberation and eventually the state of buddhahood. So, Buddha’s third main activity is turning the wheel of Dharma in Deer Park, Sarnath, near Varanasi, and bestowing many teachings to many different followers. Actually, Buddha teaches many different followers at the same time with his one voice speaking in all languages and also in different topics, according to the beings’ own mentalities. In such way, he turned the wheel of Dharma for many years.

Extracted from Entering the Path of Enlightenment (2021), by His Holiness the 42nd Sakya Trizin, Ratna Vajra Rinpoche; The Sakya Tradition Publications. 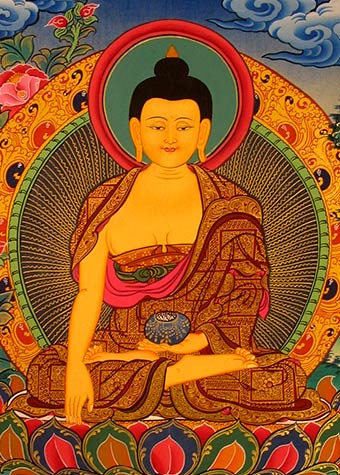