The great Sachen Kunga Nyingpo, emanation of Lord Avalokiteshvara, embodiment of the compassion of all the Buddhas, emanation of Lord Manjushri, embodiment of the wisdom of all the Buddhas, was born in the Khön family to Khön Konchog Gyalpo and Sonam Kyid (known as Machig Shangmo). Shortly beforehand, the Lord of Mahadsiddhas, Namkha’upa Chokyi Gyaltsen, was meditating in clear light. In his pure vision he saw a rainbow canopy in the space over Kar Ghong Valley. In the centre of the rainbow canopy he saw Avalokiteshvara Khasarpani clearly in Bardo form, with one face and two hands in a standing position. His right hand was in the gesture of excellent giving, while between the thumb and ring finger of his left hand he held an utpala flower. He was adorned with rich cloths and precious jewels.

Sachen Kunga Nyingpo was an extraordinary child. From a very young age, he was skilled in reading, writing and the common sciences such as astrology, Sanskrit, poetry, rhetoric, medicine, gemology, zoology and psychology etc. Through his mastery of these fields of knowledge, he pleased all the people. His Noble Father was the upholder of many teachings and he imparted several to Sachen Kunga Nyingpo.

This sacred verse of only four lines contains the pith essence of the Mahayana teachings. It became very famous throughout the Land of Snows and to this day is studied and practised by many great masters. When Sachen Kunga Nyingpo had received this teaching, seven swords connected in a continuous line emanated from the heart of Manjushri and were absorbed into Sachen Kunga Nyingpo’s heart. This signified that initially there would be seven outstanding emanations of Manjushri in the Khön family and that subsequently there would be many more emanations of Manjushri in the Khön lineage.

Due to receiving this direct blessing, Sachen Kunga Nyingpo effortlessly mastered many kinds of knowledge. However, in order to comply with the conduct of noble beings and that of the common people, he undertook extensive formal training. At the age of twelve he went to Rong Ngurmik to receive the Abhidharma from Geshe Drang Ti Dharma Nyingpo. Much to everyone’s amazement, he immediately understood both the words and the meanings.

He visited his teacher, Namkha’upa, and received teachings on the four classes of Tantra from him. He also received further Sutra teachings, including Shiccasamuccaya, the Guide to the Bodhisattva’s Way of Life and the Sutrasamuccaya, etc. After that some senior Sakya people decided that it was time for Sachen Kunga Nyingpo to study the teachings that were held by his Noble Father. Thus he went to receive teachings from Khön Gi Chu Wa Dra Lha Bar, who was in the same lineage as the Khön family. Sachen Kunga Nyingpo proved to be the most intelligent of all Khön Gi Chu Wa’s students. He understood each and every meaning of the teachings thor-oughly after hearing them only once.

Sachen Kunga Nyingpo thought that there had been no breakage of samaya apart from thinking that Lama Shang Gonpawa did not have the Lam Dre teachings. So he did these practices. When the Lama recovered, he began to bestow the complete Lam Dre teachings and many other teachings also. This was done slowly, over four years, during which time Sachen Kunga Nyingpo thoroughly understood the teachings. Towards the end, Lama Shang Gonpawa told Sachen Kunga Nyingpo that he should not even mention the name of the precious Lam Dre teachings for the next eighteen years. After that, he would be the owner of these teachings and he would then be free to teach them or write them down. He told him that if he decided to concentrate mainly on teaching others, he would benefit countless sentient beings. Specifically, three of his disciples would reach the state of Mahamudra in their present life, seven would attain the state known as ‘patience,’ which is close to the state of Mahamudra and many others would attain high realizations.

The Good Qualities of His Realization

Sachen Kunga Nyingpo kept the precepts and samayas of the Three Vows perfectly without even the slightest transgression. He was the embodiment of loving kindness and compassion. He lacked attachment to material things. He pleased his teachers through the strength of his devotion and by following their instructions faithfully. He was able to see deities directly and thoroughly understood the nature of phenomena. He also possessed clairvoyance and miraculous powers unlimited by time and space. It has already been mentioned that as a child, in his pure vision, he saw Manjushri along with Green Tara and Arya Achala, who dispelled all obstacles.

On another occasion, Sachen Kunga Nyingpo suffered a relapse of an earlier illness. As a result, he forgot all the Dharma teachings he had received. Although he could receive other teachings again from Dharma friends or refer to them in books, there was no Guru from whom he could request the precious Lam Dre teachings nor were there any writ-ten texts available. He was very distressed, because even if he were to travel to India, he was not sure whether he could receive the precious Lam Dre teachings again. He then went into retreat. After praying and supplicating whole-heartedly to the Holy Guru and the Triple Gem, he regained a recollection of some of the teachings. Then one day Lama Shang Gonpawa appeared to him in a dream and imparted teachings. As a result, he regained his memory of all the teachings he had received. After this he began to pray fervently and with great joy from the depth of his heart. One morning he had a pure vision of the great Mahasiddha Virupa in Sakya seated in the posture of full meditation and performing the mudra of turning the wheel of Dharma with both hands. On his right was Mahasiddha Krishnapa, on his left, Pandita Gayadhara, behind him, Kokalipa and in front of him, Vinasa. After seeing this vision, Sachen Kunga Nyingpo generated unimaginable non-conceptual samadhi in his mind. He later composed a homage to Virupa, which is recited by followers of the Sakya school to this day. After that, Sachen Kunga Nyingpo remained in retreat for a month, during which period Mahasiddha Virupa appeared to him many times and transmitted many teachings, empowerments and blessings.

Sachen Kunga Nyingpo had the power to manifest many different forms at one time. On one occasion, he manifested his body in six different places simultaneously: (1) bestowing teachings to about thirty meditators for three years in Tsar Khar; (2) giving Lam Dre teachings in Sakya to fulfill the wishes of his holy teachers; (3) receiving teachings on Chakrasamvara from Lama Mal Lotsawa; (4) performing a consecration ritual in Dring Tsam; (5) giving precious Lamdre teachings in Zang Dong nomad region; and (6) giving other Dharma teachings in Shap Go Ngar. These manifestations were discovered only after Sachen Kunga Nyingpo had entered into parinirvana, when his disciples discussed his noble Dharma activities.

Khampa Dorgyal was filled with remorse for his evil intentions and confessed his nefarious plans. He promised that from then on he would offer his body, speech and mind in service to Sachen Kunga Nyingpo. He then returned to the black magician Lachen Taktsa and lied to him, saying that he had carried out the assassination of Sachen Kunga Nyingpo. Lachen Taktsa entrusted his belongings to Khampa Dorgyal, and told him that his rosary and mattress were powerful magical instruments and they should be kept clean and not moved. But Khampa Dorgyal did precisely the opposite and he also did likewise to the other black magician, Rewa Zugu. This completely undermined their black magic activities.

Sachen Kunga Nyingpo, using his great Dharmic power, instructed Dharma protectors to subdue the two black magicians. These Dharma protectors sent many emanations, including two black yaks who performed wrathful activities, such as sharpening their horns, etc. They also sent other emanations, such as black birds and black dogs, etc. During that time, Khampa Dorgyal managed to drive away all the disciples of the two magicians. For a month he gave every appearance of serving them assiduously. Then on the 29th day of the lunar month, he subdued both of them. When he returned to Sakya, Sachen Kunga Nyingpo was very pleased with what he had done. He gave him huge rewards, and in particular he imparted special instructions to him on the pith essence of the teachings, which would enable him to gain Buddhahood in one lifetime. Then Khampa Dorgyal returned to his native Kham and meditated. He displayed signs of having attained major siddhi. It is said that he was certain to gain Buddhahood in Bardo.

On another occasion, a man from Kham visited Sachen Kunga Nyingpo, saying that unless he was shown a sign that Sachen Kunga Nyingpo was a true emanation of Avalokiteshvara, he would kill himself right there. So saying, he held a knife to his heart. Sachen Kunga Nyingpo replied that there was no reason for him to stab himself, and showed him the palm of his hand, on which an eye was clearly visible.

Sachen Kunga Nyingpo had many great disciples. The foremost among these was Lopon Rinpoche Sonam Tsemo, his physical and spiritual son, who resides on the first bhumi. As prophesied by Lama Shang Gon Pa Wa, and also revealed to Sachen Kunga Nyingpo in a dream on the eve of a major empowerment from Khön Gi Chu Wa, three of his disciples achieved the excellent Mahamudra within that lifetime. Seven disciples attained a high state of realization and many others became great practitioners, very learned etc. Also there were uncountable hidden disciples who became great scholars, powerful practitioners and accomplished meditators while maintaining their everyday lives and activities.

After holding the throne of Sakya for forty-eight years from the age of twenty to the age of sixty seven, Sachen Kunga Nyingpo entered into parinirvana in 1158, on the fourteenth day of the ninth lunar month in the year of the Male Earth Tiger. Even common people perceived signs such as celestial music, heavenly fragrance and rainbow light filling the sky. Most witnessed his body manifested in four different aspects. The first aspect proceeded to Sukavati, the second to Potala, the third to Odiyana and the fourth to the Golden Colored Realm in the north.

When Sachen Kunga Nyingpo’s physical remains were cremated, those who were present felt no sorrow, but entered into deep meditative absorption. They all perceived his body as a deity and some perceived two distinct deities. When his holy ashes were scattered into the sea, a mandala of the deity appeared on the surface of the water as clearly as if it had been painted.

Throughout his extraordinary life, there were times when it appeared that through illness he had completely forgotten all the teachings he had received. However, he prayed fervently and with such devotion to the Holy Guru and the Triple Gem, that through the blessings of his Holy Gurus, he regained his recollection and even received further teachings directly from Mahasiddha Virupa. In actuality, he did not forget what he had learned. Sachen Kunga Nyingpo was an emanation of Avalokiteshvara, who had abandoned all the obscurations, gained all the qualities and is residing in the state of Buddhahood. All of these events were merely a dis-play by which he inspired the faithful and set an example to be followed by practitioners of the future. 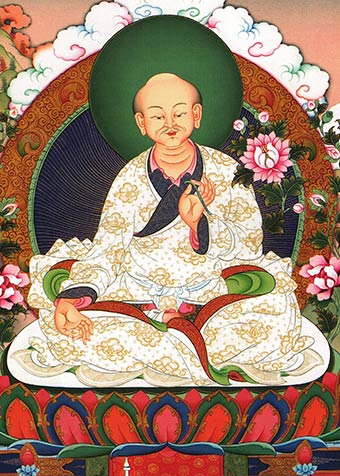