Choeje Sakya Paṇḍita Kunga Gyaltsen, commonly known as Sapaṇ, is the 4th Sakya Patriarch and also the 6th Sakya Trizin was born in Male Water Tiger Year (1182) in Sakya. He was one of the greatest scholars in Tibetan history and one of the so-called ‘Three Mañjughoshas of Tibet’. He is the son of Pelchen Opo, who was the son of Sachen Kunga Nyingpo, and the nephew of Sönam Tsemo and Jetsun Drakpa Gyeltsen.

When Sapan entered his mother’s womb, she dreamed of a crowned Nāga king coming to her; as an infant he spoke and wrote Sanskrit; as a child he was gentle and compassionate, knew many topics without having studied them, and imbibed the Dharma without effort.

One night when he was seventeen, Sakya Paṇḍita dreamed that the master Vasubandhu appeared to him and conferred the knowledge of the entire Abhidharma Kosha to him directly. At eighteen he dreamed that Dignāga placed him on a high throne and he was given the key to all of his teachings, and when he awoke he possessed a complete knowledge of logic. As he grew, he received teachings from many great masters both within his family and abroad although his uncle, Jetsun Dragpa Gyaltsen was his primary teacher. He continued to distinguish himself for his preternaturally quick mastery, sharp discernment, and elegant instruction. He was accomplished in all the sciences and medicine, as well as grammar, poetry, art and music. He composed numerous lucid philosophical commentaries.

He authored more than one hundred texts and was also a prolific Sanskrit translator. His major works include Treasury of Epistemology, Clear Differentiation of the Three Vows, Clarifying the Sage’s Intentions, Treasury of Aphoristic Jewels and Entrance Gate for the Wise. His writings are among the most widely influential in Tibetan literature and prompted commentaries by countless subsequent authors. He taught widely and became renowned across Tibet for his scholarship and teaching skills.

Remembering his uncle’s (Jetsun Dragpa Gyaltsen’s) earlier prophecy, Sakya Paṇḍita journeyed to China at the age of sixty-five. In order to determine the extent of the lama’s knowledge, Godan Khan devised a test. He had his most clever magicians create an illusory temple and asked Sakya Paṇḍita to consecrate it. But when the lama said the appropriate prayers and scattered the blessings of rain, the temple became completely real and all could walk in it. This has been called the Emanation Temple. After this the Khan had great faith in Sakya Paṇḍita and received many important religious teachings from him. As a sign of his great reverence for Sakya Paṇḍita, Godan Khan had three exquisite statues of him cast in gold, silver and other precious metals. Each was inscribed on the back in Chinese, Tibetan and Mongolian and personally consecrated by Sakya Paṇḍita. One remained in China, one in Mongolia and the third was sent to Tibet.

Shortly before he passed away, Sakya Paṇḍita named his nephew, Chögyal Phagpa, as his successor and then Sakya Paṇḍita placed his bell and dorje on his chest in cross position along with many other auspicious signs. He entered Mahaparinirvana at the age of 70 on the eleventh month of the fourteenth day of the Tibetan calendar. After Sakya Paṇḍita was cremated, many relics were found and numerous Buddhist images appeared on his bones. 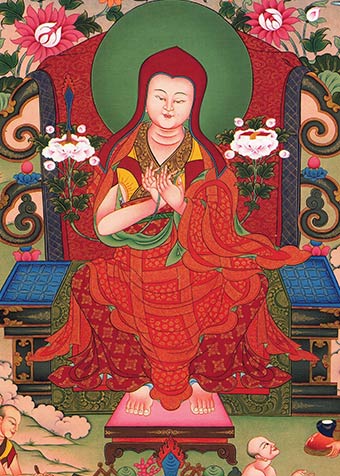